Walking the dog could take on a whole new meaning if robotic entertainment keeps up at this pace.

Did you catch the grand finale of the TV show “BattleBots”?

I wouldn’t have missed those whirling, fire-spewing, armored fights to the death!

These latest technology-infused games are a far cry from my 1970s era Rock ‘Em Sock ‘Em Robots® and the contrast got me thinking about where robots and entertainment are headed next.

Let’s take a quick peek at the history of robotic entertainment to see whether it has fueled any innovation. Can we predict the future marketplace? (Hint: I think the key might be the level of human interaction.)

My human interaction with entertainment robots

1970s
Playing Rock ‘Em Sock ‘Em Robots® with my friends was fun and we had no expectations for lights, noises, Internet connectivity, or even changing batteries. Today, the game lives on in its original configuration…amazing! 1984
I saw the original “Terminator” movie, both impressive and scary. On a side note, I wonder what percentage of robots are being portrayed as human killers? My guess is over 75 percent — maybe they need to unionize?

1998
“Robot Wars” was a short-lived TV series that was very enjoyable but, unfortunately, it was cancelled in 2004. [2] The bullet-proof enclosure around the ring seemed gimmicky at the time (partially visible in this picture taken at a similar event).


2007
I discovered a bigger, more interactive and potentially dangerous toy….Robosaurus.

I took the family to see this robot in the parking lot of a local movie theater on the opening day of “Transformers.” A stack of conveniently placed scrap cars made it easy to pick up each one and tear it in half, accompanied by a huge blast of flame. It was very ominous and my young kids were not pleased with dad’s choice of entertainment that dark and rainy night.

2008
Maker Faire came to Austin and it included the same robotic wars I had only seen on TV before. The battlefront excitement was well deserved – I was sitting in the first row when a 200 pound robot was thrown into the shield directly in front of me.

The bulletproof glass was no longer gimmicky but an essential feature!

2011
We saw the release of “Real Steel” [5], a movie where a son and dad are using old parts to build a large robot that they train to box other very large robots.

2015
“BattleBots” return to television, even if the resurgence is short-lived. The show was quite interesting, even to my non-techie wife. If you’ve never seen it, click the hyperlink to watch.

What else do I know?

To measure innovation and assess the state of the art over time, I turned to recent news about robotics as well as prior art research. While not perfect, prior art does help lay out the state of R&D, at least in a non-military level and it provides some level of trending not easily obtained elsewhere.

Interestingly, Robosaurus was patented back in 1991 as US5052680 Trailerable robot for crushing vehicles. To my knowledge, there’s only one of these robots in North America and no competition. In summary, very entertaining (substitute in “scary” if you prefer) but the market doesn’t appear to be able to support very many of these beasts. And there is little or no newer interesting IP being filed around the concept.

So, what about entertainment/combat robots? While not intended to be an exhaustive effort, my modicum of work only turned up a few robots meeting this criteria that weren’t simply a toy for kids: 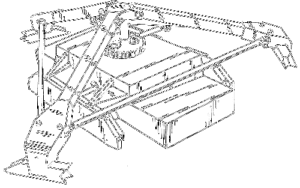 While this wasn’t deep research or analysis, I find the number to be incredibly low.

What’s ahead for robot games?

Based on both my research and imagination, I conjecture that robotic entertainment trends may include: As we humans moved away from jousting competitions where armored knights tried to kill each other (and not the horse), we paused for a while with levered, plastic robotic boxers and video games (where the only real enemy was choking on a potato chip).

Now with robots fighting in a closed arena, we may again be immersing ourselves in the action with over the top machines such as this giant superbot: http://www.cnet.com/news/robots-rumble-and-ant-man-is-huge-on-the-next-cravecast/. Could it be that our thirst for danger and feeling pain has re-emerged in “our civilized society”? Will there be a new, bigger and better equivalent to BattleBots? I’m not sure, but you can bet I’ll be in the front row (looking for the closest exit).

Guest blog by Manoj P Dandekar, Ph.D., ASA, FRICS Dr. Manoj P. Dandekar is the Managing Director of Enterprise Economic Evaluation.  He has over 30 years of experience in the identification, valuation and remaining life analysis of END_OF_DOCUMENT_TOKEN_TO_BE_REPLACED

Guest blog by Manoj P Dandekar, Ph.D., ASA, FRICS Dr. Manoj P. Dandekar is the Managing Director of Enterprise Economic Evaluation. He has over 30 years of experience in the identification, valuation and remaining life analysis of intangible END_OF_DOCUMENT_TOKEN_TO_BE_REPLACED